The Villa Palladienne was built from 1818. Its patron, Emmanuel Jobez, was the son of Claude Jobez, Master of Forges and well-known politician.

The Jobez family, from father to son, had a considerable influence on the political, social and economic life of the Jura in the 19th century. They built factories, schools, churches and castles.

Emmanuel was the heir of this fabulous journey which began in the rough countryside of Bellefontaine where, in 1788, his ancestor Le Grand Claude freed himself from the mainmorte of the canons of Saint-Claude. (Servitude which prevented people from becoming owners).

The story of the Jobez family begins in the 18th century in the harsh countryside of the Haut-Jura in Bellefontaine. The Jobez family has no title, no property, no wealth, quite the contrary, because the family is subject to servitude, it is subject to the handmaidens of Saint-Claude.

In 1788, thanks to his courage and determination, the great Claude, father of Claude Jobez and grandfather of Emmanuel, succeeded in freeing himself from the servitude that weighed on his family and thus enabled the next generation to be free. 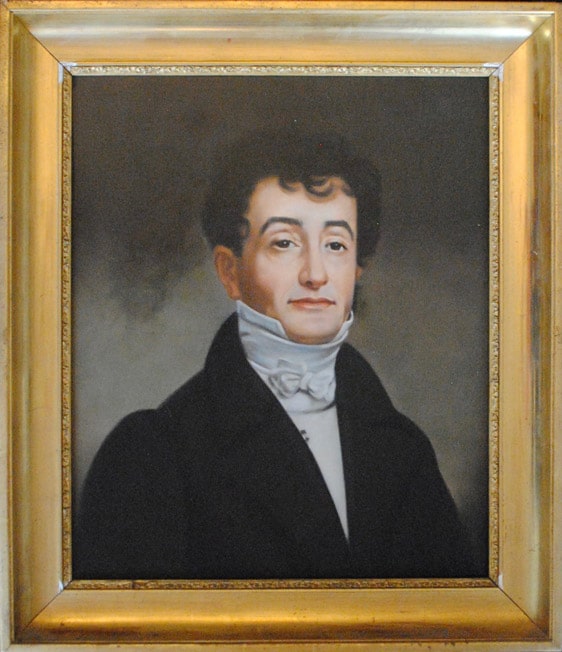 His son Claude Jobez started out as a farmer, but soon became a peddler of Comtois clocks and, thanks to his unparalleled commercial charisma, he went into business. As soon as he had the means, he bought the Rochejean blast furnaces in the Doubs. Then those of Baudin near Sellières in the Bas-Jura, then those of Champagnole and Bourg-de-Sirod before building a state-of-the-art factory in Syam, on the banks of the Ain.

At first, they made agricultural tools with remarkable sharpness.

This know-how enabled Claude Jobez to become a supplier to Napoleon and to manufacture blades for war, in particular swords and bayonets, which allowed him to increase his fortune tenfold. In addition to his business success, Claude Jobez obtained the recognition of his peers by being elected Mayor of Morez and then General Councillor of the Jura.

Claude Jobez and his wife had two children, Emmanuel and Adélaïde. They wish the best for their education. Emmanuel, gifted for studies, entered the Sorbonne at the age of 17 and studied literature, architecture, politics and music. He met writers such as Chateaubriand, Alfred de Musset, Stendhal, Benjamin Constant and Lamartine. During a trip to Italy, he fell under the spell of the work of Andrea Palladio, the great architect of the Italian renaissance. He became so fascinated that he imagined building a replica of the famous Villa Rotonda in Syam in the Jura, built in the 16th century in Vicenza by the great master for an aristocratic family from Venice. Heir to most of his father's immense fortune, he abandoned his father's business in favour of his brother-in-law Etienne Monnier to devote himself to this project and to politics. He became deputy of the Jura in 1815. He was 30 years old. 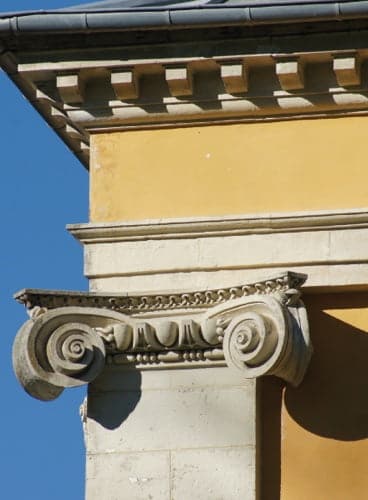 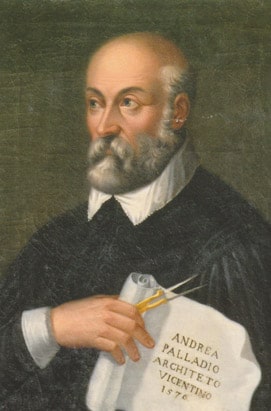 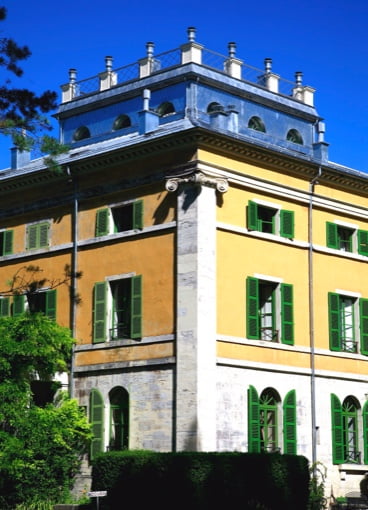 A thousand miles from Italy, immerse yourself in the art of living of the Venetian Renaissance palaces through this 19th century villa, a vibrant tribute to the Master Andrea Palladio.

Neoclassicism is a continuation of the classical works of antiquity. In his work De ArchitecturaVitruvius, a true codifier of the architectural practice of his time, sets out three essential qualities for any building: durable, useful and beautiful.

According to him, architecture is an imitation of nature.

The Palladian Villa in Syam is a work that corresponds to a classical conception of architecture. Andrea Palladio was an Italian architect of the Italian Renaissance whose work transcended the codes built by Vitruvius. His focus was on mathematical proportions.

He is world famous for bringing light into homes.

A visit to the Palladian Villa is a succession of experiences.
One of the most unusual is the revelation that all the ribs in The Villa are multiples of the number 8.

The house is a square of 24 by 24 meters and 16 meters high.
8 large rooms per level, distributed by a central rotunda supported by 8 neoclassical columns.

The Rotunda has 4 circular balconies overlooking a glass ceiling. There are 8 steps to the house and 8 steps to the cellars. At the park level, the house is located at the junction of the two ellipses of a huge figure 8 which forms the main promenade. 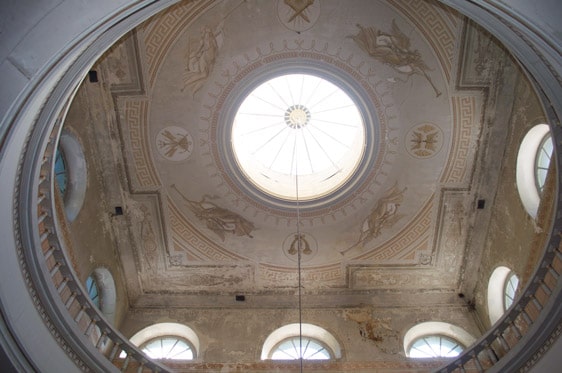 The unique collection of wallpapers

A real treasure of Syam. It is the most important collection of 19th century wallpapers and panoramics in a house open to the public. The greatest manufacturers are represented and sign decors in an extraordinary state of conservation. Zuber, Defossé, Leroy, Pierce-Fontaine, Mader, Joseph Dufour... Each piece is a unique decoration.

Frescoes of Pompeian inspiration (Bishop's room, Rose room), history of antiquity (billiards), toile de Jouy... Variety of decorations which tell the political, artistic and social history from Greek antiquity to the Empire through the romantic period.

Panoramic wallpapers replaced painted frescoes and stretched fabrics in an effort to be modern. In those years. Wallpaper was an innovative process.

Finally, at the Palladian Villa in Syam, there is a celestial decoration, a fresco painted directly on the plaster in the dome of the Rotunda. Musical glories and cherubs are adorned with antique draperies in sepia tones of infinite beauty. 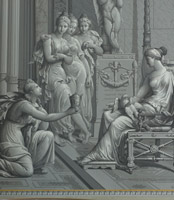 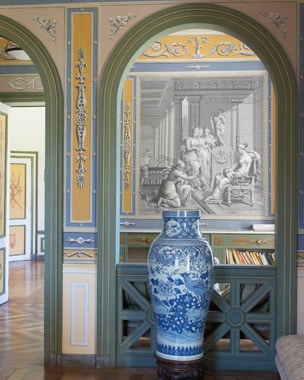 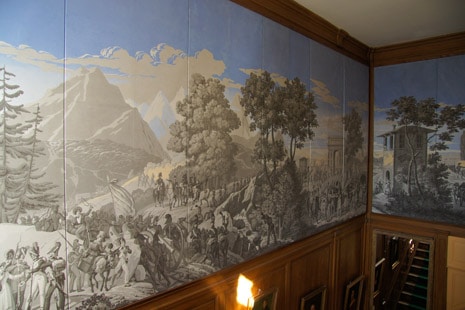 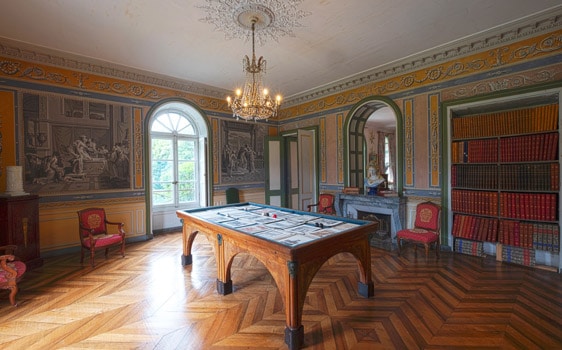 The house benefits from its original furnishings, the apartments having never been moved: bourgeois furniture from the Empire, Restoration, Charles X, and Louis-Philippe periods.

The furniture is extremely comfortable. One can feel that the priority for its occupants was the softness of life and well-being.

The parquet floors in each room of La Villa Palladienne are unique and represent works of art in their own right. The best cabinetmakers were called upon to carry out this work.

Two centuries later, their current state, in perfect conservation, proves the quality of the work done.

Made like mosaics, they replace the marble and mosaics of Italian villas. Different types of wood are mixed to achieve technical and aesthetic objectives (acoustics in the Monsignor's room). The result is a floor as beautiful as in Italy, which is pleasant to live on all year round. The most noble wood species were favoured: oak, cherry, fir, maple, chestnut... 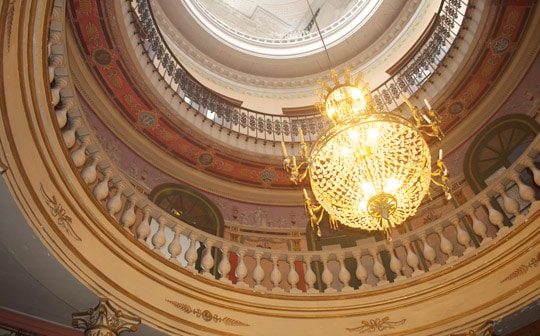 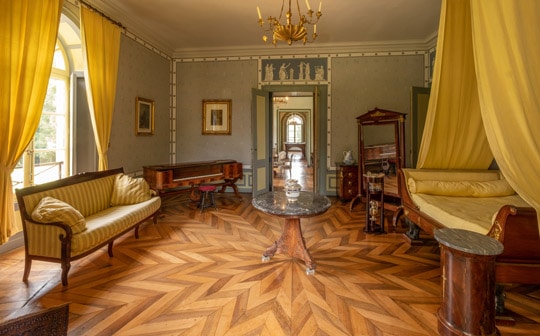 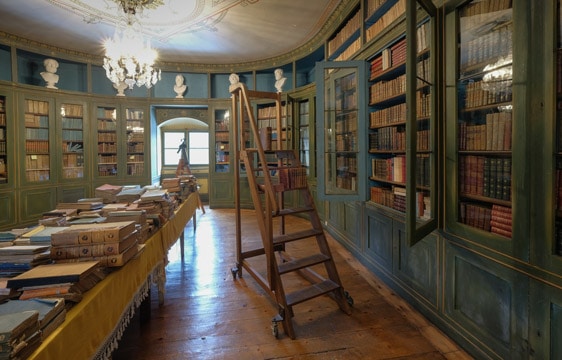 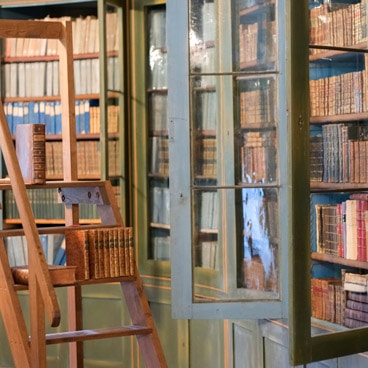 Thanks to the efforts of the current owners, Brigitte Cannard and Claude Darbon, the remarkable library of La Villa Palladienne is gradually being restored.

At the time, on the second floor of the house, Emmanuel Jobez had a sumptuous library: 24 metres long... up to 36,000 books!

The same books, the same authors, in the same places of the original library, such is the audacious bet of the current owners of the place!

This website uses cookies to enhance your experience when browsing the site. Of these cookies, those categorised as necessary are stored on your browser as they are essential for the basic functionality of the website to work. We also use third party cookies that help us analyse and understand how you use this website. These cookies will only be stored in your browser with your consent. You also have the option to decline these cookies. But disabling some of these cookies may affect your browsing experience.
Required Always Enabled
Necessary cookies are absolutely essential for the proper functioning of the website. These cookies ensure the basic functionality and security features of the website in an anonymous manner.
Functional
Functional cookies enable certain features to be performed such as sharing website content on social media platforms, collecting comments and other third party features.
Performance
Performance cookies are used to understand and analyze key website performance metrics, thereby providing a better user experience for visitors.
Analytical
Analytical cookies are used to understand how visitors interact with the website. These cookies provide information on visitor metrics, bounce rate, traffic source, etc.
Advertising
Advertising cookies are used to provide visitors with relevant ads and marketing campaigns. These cookies track visitors to websites and collect information to provide personalized ads.
Other
Other uncategorized cookies are those that are being analyzed and have not yet been categorized.
Save & Accept